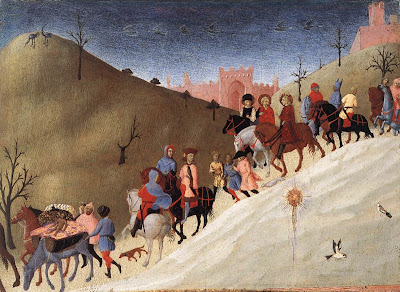 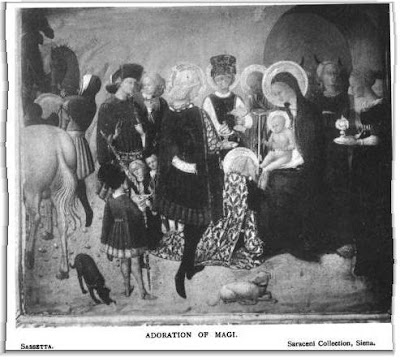 Some images that should be available in better reproductions obviously are not. The black-and-white photo of Sassetta's Adoration of the Magi is from Bernard Berenson's 1909 book, A Sienese Painter of the Franciscan Legend. There's a color version of this image available from the Oblates of St. Joseph, but the resolution is hardly any better. Originally, the two paintings seen above were part of the same work. The irony is that what was the top half of the original pair, a fragment now at the Met depicting the Journey of the Magi (top image), is available online in beautiful high res. It's a knockout if you're a fan of late Gothic art! In it, the Star of Bethlehem seems to be hovering over the ground, the effect of separating the two halves of the original work. If they were put back together, the Star would appear to hang over the Virgin and Child who appear in the Adoration. (For the bad color reproduction of the Adoration, see here.) To see the Met's image in higher resolution, click the picture above.